Wild camping is one of those things that many people want to do, but are scared of trying as they’re not sure of what to expect.
It doesn’t help that the internet is bare (for once!) of information on the matter. There don’t seem to be any good guides or tips anywhere – probably because it’s not ‘technically’ legal.

Having wild-camped with my sister and friend for the first time in France for 2 weeks this summer (’09), I’m fairly clued up as to the “dos” and “don’ts”, and also a lot less scared as to what might happen!

Below is a recap of our experiences. You’ll find info on the good and bad places to wild-camp in France. I’m sure this info is valid for any European country: Spain, Germany, Italy – you name it!

A recap of our experiences;

These are generally quite easy to find, and often offer great camping spots with benches for cooking / eating and sometimes toilets! Every time we followed a picnic sign, we ended up in a secluded spot, quiet after 20h00.

Tying in with the idea of picnic spots, these areas generally have a fair number of picnic spots close by. If not, they can still be good options. Lakes and other large geographical features tend to be away from built up areas and offer spectacular places to camp for the night. 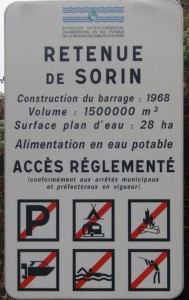 Don't worry about the signs

Another good one here, as there’s shelter and they’re often pretty close to life so you’re not stuck out in the middle of nowhere. You do need to look out for signs of activity though! A busy forest being cut for logging is not good (see below!)

We only ever did this once and it turned out well. If you’re ever stuck, just go knock on someone’s door (hopefully you can speak the language!) and ask if you can camp or if they know of anywhere to go. We did this one night and were directed to a nunnery – the best camping spot we found! 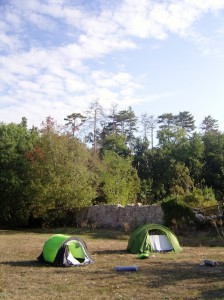 Camping at the nunnery

Yes, as stupid as it might sound, this did happen. You’d probably think “who in their right mind would camp next to someone’s house, on their land?” and the answer would be YOU; if light was fading, you were hungry and just wanted somewhere to sleep.

We came across these spots a few times. Vineyards, forests with logging going on are all not good! This is really only relevant for places you *shouldn’t* really be. Picnic spots show signs of activity, but are generally accepted for camping.

This brings up the important point that you shouldn’t leave it too late to start looking for camping spots. We did several times, and it mostly meant an uncomfortable night’s sleep (although it did pay off once, leading us to the nunnery!)

Now we did all of this with a trusty Peugeot 306, and it would have been hell without it.
I guess you could do it on foot, but it would make life a lot more difficult – if you found yourself in a dodgy area with dusk approaching you’d be stuffed.

We invested in Quechua (from Decathlon) pop-up tents which, after 2 weeks of setting up camp at dusk and leaving at dawn were a godsend (literally take 10 seconds to put and AND down!). I’d recommend these tents to anybody who’s camping anywhere; they’re cheap and extremely cheerful.

We also bought a portable gas stove – not one of the cheap screw-on tops for gas canisters, but the more sturdy black-box gas stoves for ~£12.99.

Generally, we didn’t have many problems with being smelly or dirty – we’d stay in a campsite every few days to clean up, or go to a beach and wash. In France there’s almost always a shower at the beach.

I’d recommend wild-camping to anyone. You won’t get pestered by the law enforcers as long as you’re tidy and quiet.
It’s a great experience, and best of all – it’s free!

There is a great article from UK Hill Walking on wild camping. It’s mostly applicable to the UK, and to camping on mountains and hills, but there is a lot of useful information for the first time wild-campers there.
Wild camping on UK Hills

33 comments for “Wild Camping in France”